Relic of a Quiet Community 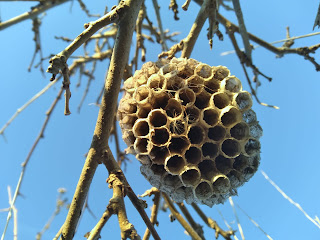 Like a little spaceship, a small wasp's nest dangles from the branch of a low shrub. Just a foot or two off the ground (and safely vacated for the winter), it allows a close-up look at the summer home of a paper wasp colony. 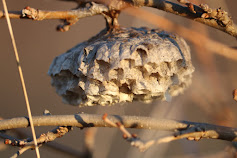 A young wasp queen, or foundress, is the only member of her colony to overwinter; the rest (including the old queen of the previous summer's colony) will die off as the temperatures dip towards freezing. The young queen will find a protected cranny or crevice in which to spend the winter, emerging with the springtime thaws in April and May.
To construct the nest, the foundress will begin with the "petiole"--the stem that attaches the cells below to a twig, eave, or other surface. She will then begin building the hexagonal brood cells in a single layer, and laying an egg within each cell. The nest material is a pulp made from wood or stems. Unlike the large, covered nests of yellowjackets and hornets, those of paper wasps remain open at the bottom, and the colonies are relatively small: from a dozen or so up to around a hundred individuals (the nests of yellowjackets or hornets, on the other hand, can house hundreds or thousands of individuals).
After the egg hatches, worker wasps will feed the larva bits of caterpillars and other insects until it is ready to pupate. At that time, the larva will seal itself in its cell until it emerges as an adult and joins the colony as a worker, or later in the summer possibly a new queen or male drone.
Nests are not normally reused year after year, so each stands as a brief testament to the life of the colony that once inhabited it. Imagine a little society, growing and living for a single season, and the only evidence of its existence a flimsy, papery structure, easily overlooked. 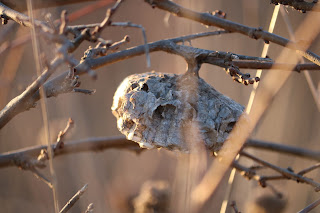 Sources/additional reading:
Posted by Sycamore Greenway at 3:31 PM No comments:

It's mid-January. It's cold, it's often windy, and an overcast sky can sometimes make it hard to find the beauty in the natural world. But fortunately whimsy can be found in even dreary circumstances, with a bit of attention and imagination.

The cracked knot in a tree trunk that looks a little like a long-haired face. The catalpa seedpods whose curls I apparently can't find a word other than whimsical to describe. And leaves, again curling (is curling by nature whimsical?) or struggling futilely to fly free. 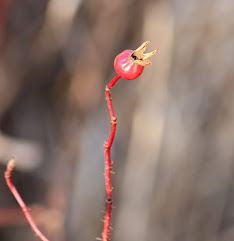 This year's entry also features a pop of color, crimson against the midwinter brown. Something about the silhouette--the smooth, bulbous head atop a skinny, kinked stem, topped with a ragged crown of dry sepals--brings to mind those unfortunate souls of Disney's Ursula.

It's a single rose hip, from a wild rose near the wetlands. Though the hips of non-native multiflora rose can be found throughout the Greenway, the larger hips of what appears to be a native rose are not as common.

They are the fruit of the rose, containing its seeds, and are a valuable source of nutrition for wildlife including birds and small mammals. Rose hips are also used by humans to make jams and jellies, teas, and other tasty items.

It isn't much, but it doesn't have to take much. A moment of delight, requiring nothing more than that bit of attention and imagination, can make those winter days a little less bleak.

Can you be on the lookout for whimsy? Or does it just make an appearance whenever it feels like it? Regardless, keep your eyes open and your imagination at the ready.

Posted by Sycamore Greenway at 5:38 PM No comments:

Snippet of a Rainbow 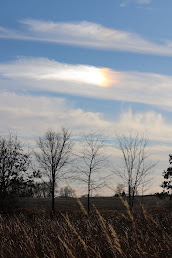 I am usually too busy looking down to take the time to notice the astronomical and meteorological happenings in the sky. My eye looks for the motion of a bird or the subtle differences in the shape and color of leaves, while neglecting the distant beauty that has captured the attention and imagination of earthbound humans for millennia.

A late afternoon walk, with the gibbous moon looming over the wetlands, and the sun hanging bright over the soccer park. Squinting up to locate the fiery orb among the wisps of clouds, I realize that the bright light in my line of sight isn't actually the sun but rather a gorgeous, glowing, rainbow-colored sun dog. The much brighter sun hangs off to the right, too dazzling to glimpse (I look beyond to find the other member of the paired sun dogs but fail to locate it). 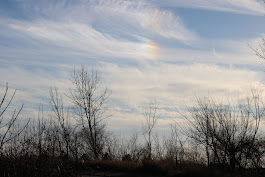 Just a snippet of a rainbow, hanging in the sky. As I and the sun move, the sun dog's appearance changes from that faint rainbow to a fierce flame that transitions from orange on the sun side to hot white opposite.

The phenomenon happens when sunlight refracts off crystals of ice in the sky, creating prisms of light. Also known as mock sun or parhelion, sun dogs usually occur when the sun is near the horizon, and can last up to 30 minutes.

After the few quick glances that I can bear, my attention fades back to the ground and I begin scanning the dry grasses and leaves again. Returning to the familiar and comfortable life along the trail, but with a reminder to be sure to look to the sky, beyond the soaring birds, every once in a while. 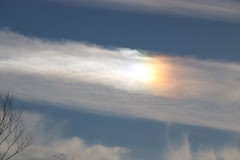 Posted by Sycamore Greenway at 5:31 PM No comments: